While there has been much focus across the U.S. recently on inflation throughout the economy, the healthcare industry has long captured the attention of the nation as costs have continued to rise steadily over the last few decades.

Healthcare is a uniquely positioned sector in the U.S. economy that impacts the personal lives and wellbeing of people across the country. The subject of ever-rising healthcare costs—and how to address them—understandably holds a prominent position in the concerns of politicians and everyday Americans. Ahead of the 2020 elections, a January 2020 poll by Morning Consult and the Bipartisan Policy Center found that 56% of the registered voters surveyed listed healthcare among the most important issues in their vote choice (followed by the economy and immigration at 44% and 33%, respectively). It is evident then why the rising costs of healthcare, and the potential solutions to address the underlying factors driving this, receive such consistent attention.

While fundamental underlying factors remain the subject of constant debate, the disaggregation of healthcare spending by type of service or product is well understood, with hospital care representing the greatest portion of overall spend. In 2019, hospital care represented 31% of overall healthcare spending ($1.2 trillion), followed by physician and clinical services at 20% ($772.1 billion) and retail prescription drugs (10%) at $369.7 billion. The figure below illustrates the breakdown of overall spending by type of service or product: 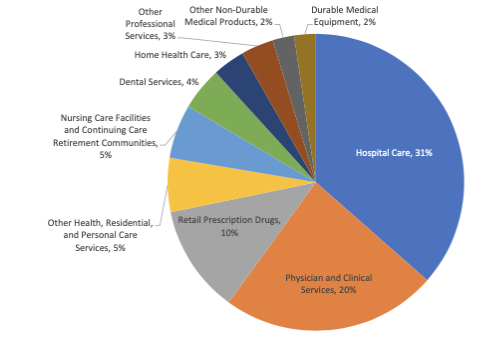 Source of Healthcare Funds
On the other side of the equation, another key area of focus where stakeholders look to address healthcare costs is the source of funds—in 2019, private health insurance represented 31% of overall health spending, with Medicare at 21%, Medicaid at 16%, and out-of-pocket spending at 11%. CMS further notes that in 2019, the federal government (29%) and households (28%) accounted for the largest shares of spending, followed by private businesses (19%), state and local governments (16%), and other private revenues (7%).

As the COVID-19 pandemic began to spread across the U.S. in early 2020, among numerous prominent concerns was how the U.S. healthcare infrastructure would withstand this new threat, including dynamics around paying for the resulting necessary care. As the unemployment rate began to rise, policymakers and analysts questioned how this would impact the health insurance ecosystem: How drastically would this reduce employer-sponsored insurance? How will this increase state Medicaid enrollment? To what extent will the Affordable Care Act mitigate this impact as compared to prior economic downturns?

Questions and considerations such as these, among other factors, drove renewed interest in fortifying the U.S. healthcare landscape. Policymakers have continued to debate proposals to expand healthcare coverage through a combination of actions. Such proposals have included lowering the Medicare eligibility age, expanding Medicaid (either directly or indirectly) in states that have not yet opted to do so, expanding benefits associated with Medicare, expanding benefits associated with the Affordable Care Act and its related premium costs, and suggesting a host of drug price initiatives.

Higher Insurance Premiums
One of the avenues by which Americans most directly experience the rising costs of healthcare is insurance premiums. Per a recent report from Kaiser Family Foundation, annual family premiums for employer-sponsored health insurance rose 4% to average $22,221 this year. Further, workers this year are contributing an average of $5,969 toward the cost of family coverage (with employers paying the remainder). Approximately 155 million Americans receive employer-sponsored health insurance, and since 2011, average family premiums have increased 47%, more than the 31% growth in wages and 19% increase in inflation, the report adds. Meanwhile, private insurance is not the only area experiencing increased premium costs—CMS recently announced Medicare Part B premium rates for 2022, with the standard Part B premium increasing by $21.60 to reach $170.10.

Considering these dynamics and the ongoing COVID-19 pandemic—including administration of vaccines, testing, and treatments—it is understandable that the topic of healthcare costs permeates much of daily life. As we enter a midterm election year in 2022, it would be unsurprising that the topic of healthcare continues to dominate much of the national dialogue, and policymakers will likely persist in trying to take action in the near term to address healthcare costs for Americans.

At Gilmartin, our team has accumulated decades of experience that inform our historical perspective of the healthcare industry, and we continuously monitor the ever-evolving landscape for new developments and opportunities. Contact our team today to learn more about how we work with our clients to adapt to this dynamic environment.