Earlier this year, we published our first ever Gilmartin Book Review to kick off 2021 on a lighter note. It was so well received that we decided to start our summer off on the right foot with a “Gilmartin Pizza Review.”

Originally, this conversation was sparked in an internal weekly meeting between two NYC pizza snobs, who shall remain nameless. Eventually things were hashed out, but no one could come to a conclusion on which was best. Naturally, everyone else decided to give their opinions. So, we asked our colleagues to share their favorites, and here is what they had to say. (We even allowed the West Coast voices to be heard.)

From its original location in Brooklyn, Roberta’s has come a long way, now having multiple locations across Manhattan and even nationwide shipping. The location in Bushwick is quintessential Brooklyn, with an atmosphere of a laid back hipster vibe, warm, inviting, and colorful. But what about the pizza? Well, if ever a pizza has been hyped, this one delivers on the hype. The pizza styles are original, with a variety of unconventional toppings, the mozzarella cheese is on point and the crust is just perfectly burnt and delivers a crunchiness and softness simultaneously. Various popular pies are available that will cater to your cravings, but I personally always order the Lil’ Stinker, which has pepperoncini peppers, onions, tomato, hint of garlic and offers a very nice tangy crunch that really complements the savory flavors of the pizza sauce, the mozzarella and the parmesan cheese. It is absolutely delicious pizza, but maybe not suitable during a date. 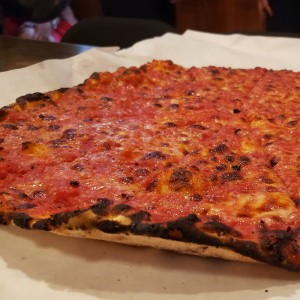 While technically not a pizza from New York City, New Haven is home to the classic coal-fired, Neapolitan style pie. Because New Haven-style pizzas are cooked in super-hot brick ovens, the pizzas come out with a “charred” crust. If you are a fan of Pizza Hut, Dominos, or Papa Johns, you will consider a New-Haven-style pizza burnt.

The big three pizzerias in New Haven are Pepe’s Pizzeria Napoletana (1925), Modern Apizza (1934) and Sally’s Apizza (1938). All three make excellent pizza, but if I had to pick one, Sally’s Apizza would be on the top of my list.

Sally’s Apizza, founded by Frank Pepe’s nephew, Salvatore Consiglio, is the quintessential northeast pizzeria. If it were not for the lighted Sally’s Apizza sign and the long line to get in, you would not know it was even there. The inside is not fancy, with old paneling on the wall and approximately ten small booths for seating. That being said, the apizza (ah-beetz) is second to none. The combination of the perfectly baked crust, tangy tomato sauce and mozzarella cheese (mootz) is always worth the wait.

So, the next time you are on I-95 in Connecticut, do yourself a favor and stop by Sally’s for some apizza. I promise you will not be disappointed. 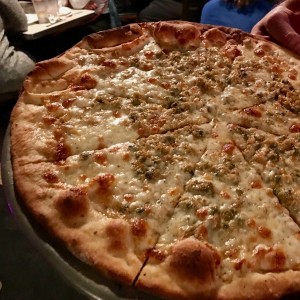 There may not be a sign on the outside of this bar, but everyone knows its name and they know yours as well. Lee’s Tavern is the local historic pizza joint you dream about. Opened in the 1940s and taken over by the Palemine family in the 1960s, not much has changed, and not much ever will.

A classic take on the bar pie, after one bite of this slice you will know why you made the trip. Each pie has a crunch that can be heard throughout the restaurant. Classic cheese pizza is a staple due its tangy sauce, but you would be mistaken not to order the white clam pie with all its garlicky goodness. You also must start off the table with an order of their famous buffalo calamari, or how most say it on Staten Island, “Galamad.” 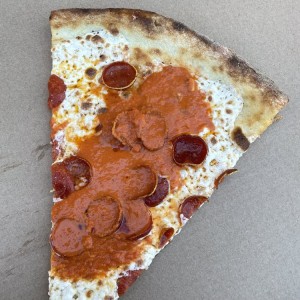 Bellucci Pizza in Astoria, Queens opened less than one year ago and has already made waves in the pizza community. Owner Anthony Bellucci first helped to reopen Lomabrdi’s Pizza on Spring St in the early 1990s. Later he was the executive chef at another New York favorite, Rubirosa. A unique twist on a slice in New York, Belluccis uses electric ovens as opposed to gas, coal or wood.

I wouldn’t usually recommend traveling to Queens for Pizza; however, the Vodka Roni Pie creates a strong argument as to why one should. Fresh mozzarella, pepperoni and vodka sauce may not sound like a novel invention, but this combination is groundbreaking. The slice will not leave you disappointed; it has fallen into my personal top 5.

Since I am a native New Yorker, of Italian descent and the author of this blog, I felt I was allowed to have two submissions!

Joe’s Pizza in East Village is my go-to spot for an authentic New York slice. Pino “Joe” Pozzuoli immigrated to the U.S. from Naples, Italy (the birthplace of pizza) in the mid-1950s and has been a pizza man his entire life. He still owns and operates the restaurant.

Joe’s isn’t fancy and neither is the pizza, but that’s the beauty of it. Joe’s serves simple, large slices made with quality ingredients using the same recipe since the 1970s. The result is a consistently good slice that is almost always fresh out of the oven since they sell quickly.

Folding up a slice of Joe’s Pizza is a classic NY experience. The last time I visited, I grabbed a slice of pepperoni and cheese to take to Washington Square Park and eat while people watching. I finished my slice before I even made it to the park and had to walk back for another. Lesson learned. I’ll never get just one slice of Joe’s Pizza again. 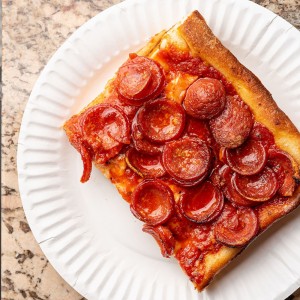 in Manhattan’s Nolita neighborhood. Just south of Houston sits this small but world-famous pizza shop. While Prince St doesn’t offer much in the way of sitting, it more than makes up for it with great tasting pizza. Prince St isn’t known for their Neapolitan pizzas or NY slices; they are known for their SoHo Squares, specifically the Spicy Spring Pie.

This rectangle shaped doughy pizza, sometimes referred to as “Detroit style,” is the most delicious, filling and savory pizza you will ever have. The Spicy Spring Pie has thick crunchy dough, a perfect sauce-to-cheese ratio, and so many spicy pepperonis that you will never run into a bad slice. As for the calorie count and nutritional value, you can burn it off on the walk home (assuming you take the long way).

Pro Tip: Any New York pizza shop worth checking out has a 40+ minute line and Prince St is no exception. However, some hungry natives have figured out a trick: order online and skip the line. By selecting “pick up” and waiting 30 minutes, you can bypass the line and check out some of the boutique stores in SoHo. 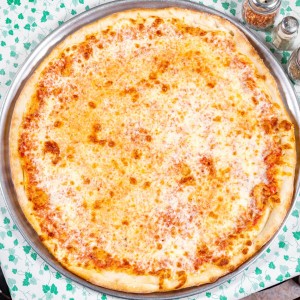 It may only have 3.5 stars on Yelp, but Pino’s on 7th Ave. at 1st Street in Brooklyn remains a favorite. While I haven’t had a slice from Pino’s in over 15 years, it is certainly the memory of grabbing slices as a kid that made it special. You know a pizza is good when you take a napkin to it first to sop up the extra oil. And who knows, maybe Smiling Pizza on 9th St. was better, but it wasn’t across the street from my elementary school and not as convenient unless there was a reason to walk to the D Train. 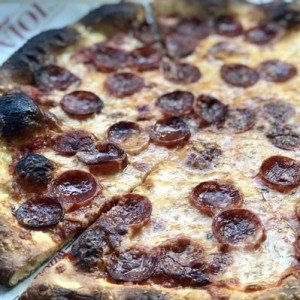 I don’t always go out for pizza, but when I do – there is none other in the Bay Area I head toward more than Gioia Pizza. Crust is great; sauce is earthy and delicious; ingredients are all locally sourced. They make their own Calabrese sausage. Last but certainly not least, I can pick up a cannoli for dessert!! 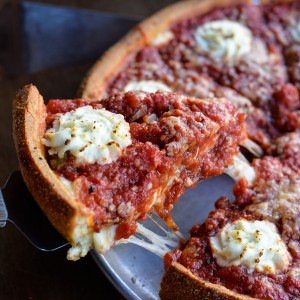 I know this reads like a Yelp review, but I am excited and NEED to stress what to get at Little Star.

1) This is a must-visit for pizza lovers. Little Star has both thin crust and deep dish pizzas – both are amazing, so whether you love Chicago style or New York, you are in luck.

2) In addition, they have an amazing salad (BelGioioso burrata w/campari tomato & basil), and appetizers (spicy chicken wings or roasted kale with feta, parmesan & lemon) as well as a limited (three-item) dessert menu, which includes a warm brownie w/ a scoop of gelato.

3) Toppings include the staples but also a vegan mozzarella, brie, or gorgonzola. 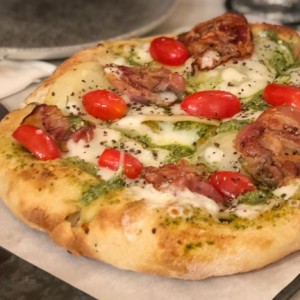 When I arrived in the Bay Area after a decade in New York City, I had two cuisine quests: to find a good NY-style bagel and NY-style slice of pizza here. There were some mixed results… I never found a comparable NY-style bagel after many conversations that went a bit like: “Have you tried the new Daily Driver location for a bagel?” “Yes, their bagels are oven-baked and dried out.” However, I did manage to find pizza that I feel is comparable to a NY slice at Tony’s Pizza Napoletana. That said, is Tony’s my favorite slice here? No, something was missing.

When I abandoned the desire to seek out all things New York on the West Coast, I ultimately found something entirely different from what I had been expecting, which was an entirely new style of pizza. I tried Gusto Pinsa Romana based on the recommendation of our friend. Gusto is #1 here for me now because of its light sourdough crust in square slices that resemble focaccia. I appreciate their classic margarita with the balsamic vinegar they include on the side, and even some of their weirder concepts like a pesto pizza with cherry tomatoes and potatoes with a side of chili oil. Gusto claims, “The dried sourdough is an old recipe from di Marco’s family that they have been using in their bakery business for over 100 years that’s been passed down from generation to generation.” Whether or not you buy into the hype, if you order from Gusto, their pies should be shared, as they are much more filling than they appear!

As always, If you have any questions about Investor Relations or just want to say hi, please feel free to contact the Gilmartin team today.