The past few years have been ones of immense strength and record activity for venture capital (VC). Following a monstrous and record-setting 2021, the first half of 2022 has been different of sorts. VC has not been sheltered from the barrage of uncertainty felt in broader markets due to macro concerns. The private market has begun to show signs of weakness despite many data points remaining historically high. As we enter the second half of the year, it is important to review how the landscape has changed over the past six months.

The onslaught of adverse economic headlines—inflation, rising interest rates, geopolitical turmoil, etc.—has contributed to the surge in volatility and slowdown in VC deals in 2022. During the first half of the year, global venture deal volume and average deal size (Seed through Series E) declined by ~6% YoY and ~12% YoY, respectively. While volume continued to grow during Q1 (albeit at a considerably slower pace), Q2 marked an inflection point as volume experienced a significant pullback, falling ~17% YoY.

U.S. Healthcare deal volume and average deal size (Seed though Series E) during the first half of the year declined ~37% YoY and ~0.5% YoY, respectively. The outsized pullback in volume has shown no signs of abating as volume in Q2 fell ~42% YoY (vs. -32% in 1Q22) and ~20% sequentially (vs. -30% in 1Q22). The weakness in volume has also been widespread, spanning across both early stage and later stage deals. Average deal size, however, has been relatively consistent ($42.7M in 1H2022 vs. $42.9M in 1H2021), but current data indicates that it may be trending lower moving into Q3. 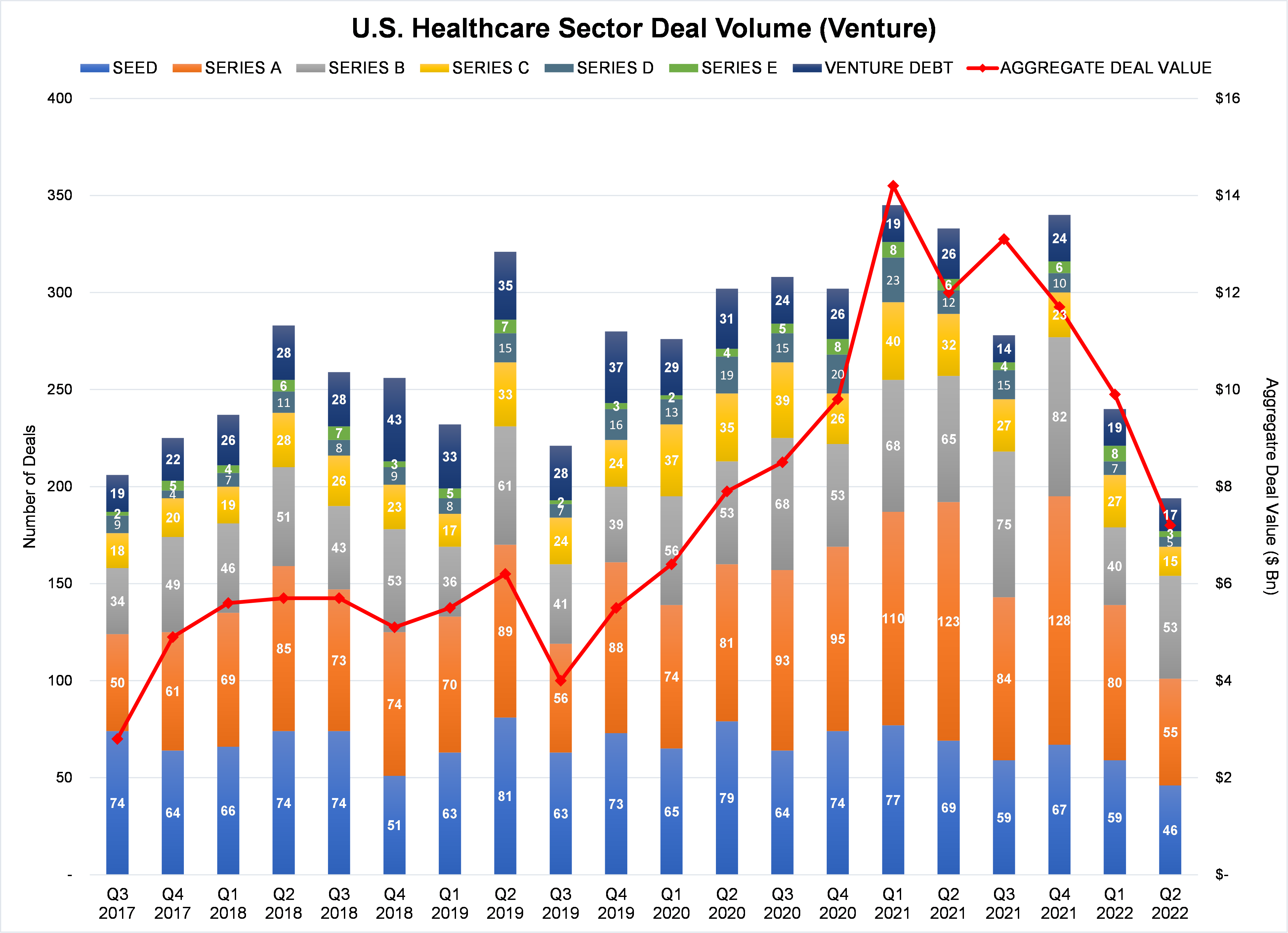 The Silver Lining: An Unprecedented Level of Dry Powder

Although deal activity has cooled, VC has continued to attract capital this year despite negative market volatility. Globally, VC firms have raised more than $100 billion through the first half of the year, down ~10% YoY but still elevated compared to pre-pandemic levels (average of ~$75B in the 1H from 2017-2019). The influx of capital and reduced level of deal activity has led to unprecedented amounts of dry powder waiting to be deployed. As of June 2022, VC dry powder globally was more than $500 billion, which is more than double the amount exiting 2019.

U.S.-based VC firms have also fared slightly better coming off the launch ramp of 2021. During the first half of the year, U.S. VC firms raised ~$79 billion, down only 0.2% YoY. As of June 2022, U.S. VC firms had more than $280B in dry powder waiting to be deployed. This marks a record high as investors continue to sit on the sidelines. 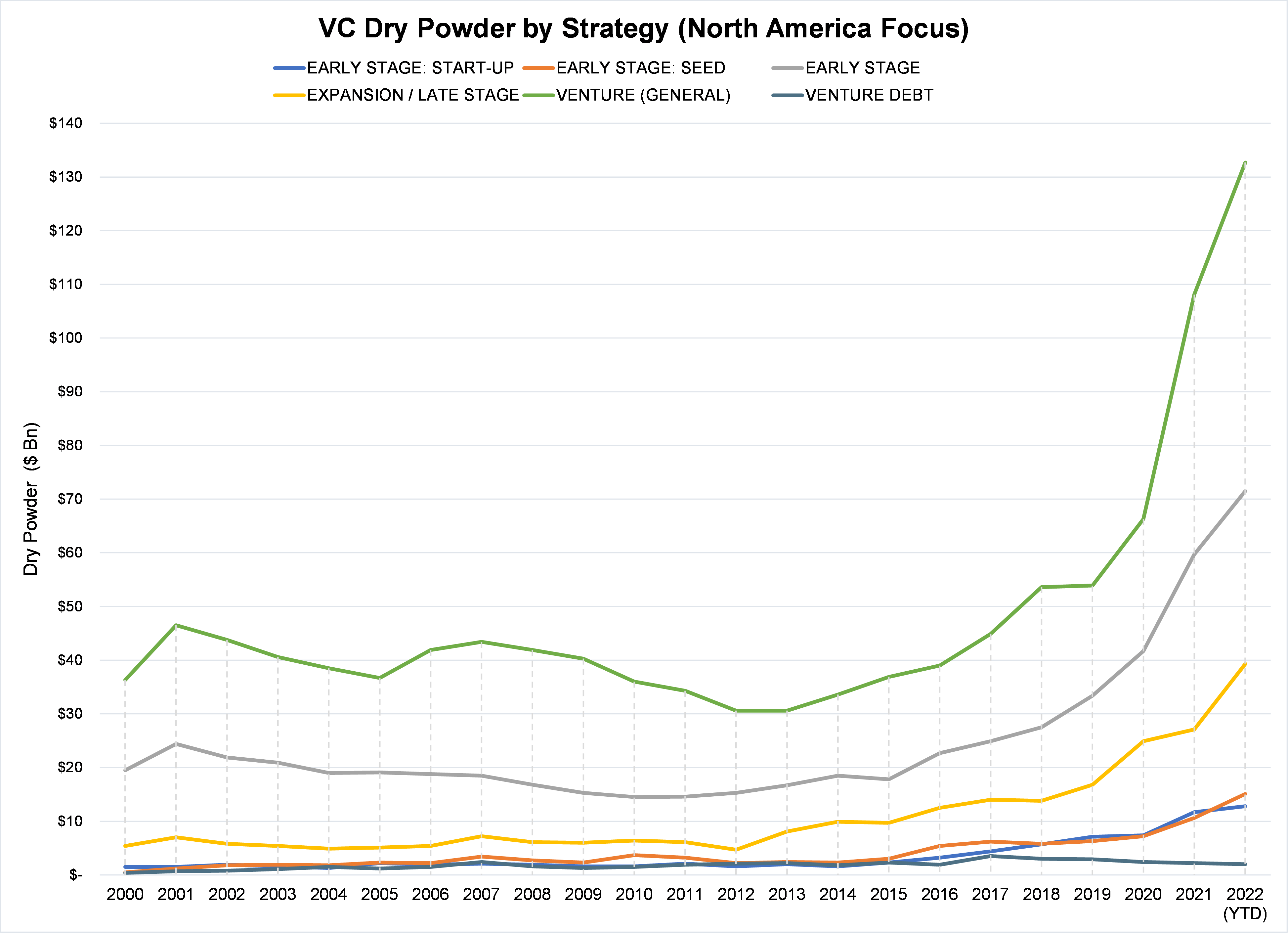 What can we expect for the rest of the year?

It remains to be seen whether the drop in activity marks an adjustment from 2021’s record-breaking venture activity or the beginning of a more sustained downturn. Economic uncertainty due to the inflation, rising rates, supply-chain problems, and lingering COVID-related headwinds may continue to impact VC and public markets. On the other hand, record-setting amounts of dry powder have been amassed by VC funds and may continue to be deployed as investors gain more confidence and clarity.

For a company looking to raise capital during this turbulent time, it is important that you continue to meet with potential investors. Although there is a heightened sense of scrutiny with new investments, the relationship building process is as important as ever. VC firms are continuing to explore investments and meet with management teams given the seismic amount of capital on the sidelines.

In our previous dive into the basics of venture capital (VC) and private equity (PE), we wrote about the general structure and process of how both VC and PE firms invest. Here we take a deeper look into the natural progression of how the venture fundraising process works.

There are five key stages of venture capital, starting from the seed round and ending with the mezzanine/crossover round. As a company develops and matures, each succeeding fundraising round represents a milestone for a company. Each round, investors will evaluate the merits of a company and how successful it has been in achieving its targeted goals. The amount of money a company can demand usually also increases as a company begins to reduce risk. Here’s an overview of each major round during the venture fundraising process. 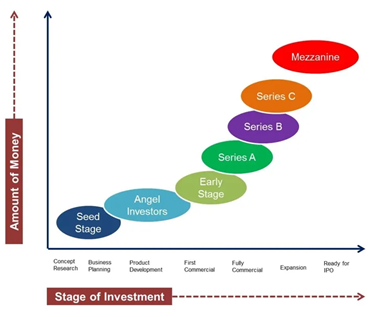 Gilmartin Group partners with many healthcare innovators, both public and private, to build nuanced communications strategies and develop sustainable messaging that sets companies up to build credibility over time while clearly conveying the differentiated value they provide. To learn more about Gilmartin and how we strategically partner with our clients, contact our team today.